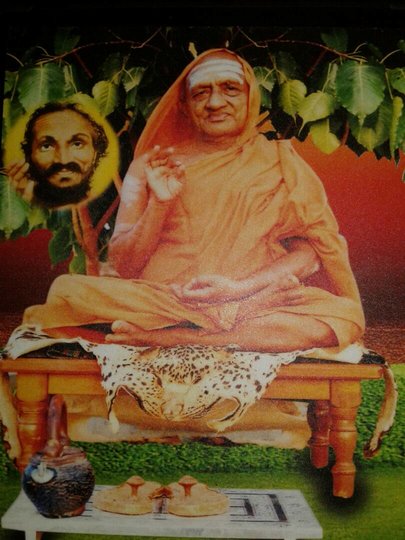 Parmahamsa Parivrajakacharya Shri Nirmalananda Swamiji (formerly Shri Timmanna) was born on 19th April 1934 in Malivu in Paivalike grama of Kasargodu district in Kerala state. He was the second child of Shri Shankara Narayana Bhat and Shrimati Devaki Bhat. He completed his primary school at Paivalike and Highschool at Puttur. He completed his BA from Poornaprajna College at Udupi. As he was interested from his childhood in God and worshiping, he initially learnt the vedic hymns and worshiping from his father. When he was 22 years old, he met Sadguru Shri Shridhara Swamiji and heard his speeches. He was influenced by Sadguru Shri Shridhara Swamiji and had inclination to renounce the worldly life. He became a devotee of Brahmaikya Parama Poojya Shri Sahajananda Avadhuta Swamiji of Kolagibees of Sirsi Taluk(Uttara Kannada) and dedicated himself completely to the Shri Avadhuta Swamiji. Later he began to serve Sadguru Shri Shridhara Swamiji and felt strong to renounce worldly life and received the “Mantropadesham” from Sadguru Shri Shridhara Swamiji. Apart from serving, he also accompanied Sadguru Shri Shridhara Swamiji to many holy places. Later he obtained “Sanyasa” and obtained the name Shri Nirmalananda Swamiji and climbed up the Yogapitha. Shri Nirmalananda Swamiji spent the next 20 years as a “Parivraajaka”, a holy pilgrim, visited innumerable Teerthakshetras in our subcontinent including the journey along the holy banks of the Ganges, a great accomplishment and became Paramahamsa Parivrajakacharya Shri Nirmalananda Swamiji. Yielding to the earnest prayer of the devotees at Shri Kshetra Gore, Kumta(Uttara Kannada), Shri Nirmalanada Swamiji decided to render services to the holy “Padukas” of Sadguru Shri Shridhara Swamiji at Shri Kshetra Gore‘. From 1985 to 24 September 2005, for nearly twenty years, he did everything possible to bring about all round development of the place and welfare of the devotees. As a result of Swamiji’s tireless efforts, there is now a well-equipped yajnashala, bhojanashala, goshala (cow-shed), rooms for devotees to stay in the place etc. Shri Nirmalananda swamiji himself many a times watered the plants, worked hard in the scorching sun and torrential rain and converted the hard dormant stony place into a green heaven of this Gore Kshetra. He managed all these, without asking anybody for the charity, but just on the volunteer donation offered on the “Padukapooja” occasion by faithful devotees and followers. He used to organize many religious and spiritual programs annually. Throughout the year, numerous major Havans and Yajgnas were a regular feature at Gore under his auspices. Without discrimination of the rich and poor, he guided the devotees who came seeking solution to their problems in life during his lifetime and awakened in them religious and spiritual interest and enthusiasm. Swamiji foresaw his moksha so, he began the construction of his Mahasamadhi on the left of P.P. Shri Sadananda Swamiji’s Mahasamadhi at Gore Ashram. On the day of Bhadrapada (Bahula) month (on Sept 24, 2005) after completing the Poojas at Paduka Mandir and Shri Guru Ganapati Temple at Gore, he started his journey towards the Himalayas to fetch the holy waters of 108 rivers of our country. On the way he attained Mahasamaadhi. Though invisible, Swamiji has been showering his affection and love on the faithful devotees by solving their problems through guidance and fulfilling their desires and thus have gained a permanent place in the depths of the devotees’ hearts.