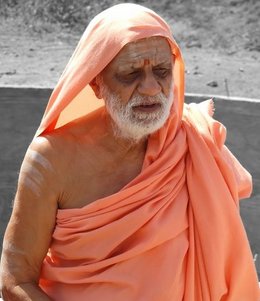 Shri Nityananda Swami (formerly Shri Shankar Pandit) was born on a full moon day in the month of Jeshtha in the year 1925. One of his ancestors, Pandit Ramchandra Pant Amatya worked in the Province of Shri Chatrapati Shivaji Maharaj. He completed his school and college education and secured a degree in ‘Automobile Engineering’ with honors. Soon after he met Shrimat PP Sadguru Bhagwan Shri Shridhar Swami Maharaj in Delhi. The same year, he received ‘Anugrah’ from Shri Swamiji at Shri Kshetra Varadapur. In 1970 he performed “Gayatri Purashcharan” within one and half year at Shri Kshetra Audumbar. In 1971 he participated in Swami Chinmayananda’s 21 days of “Gita Dnyan Yadnya”, during which he experienced ‘Self realization’. In 1973 at a place named Halkarni near Belgaum, he undertook 21 ‘Parayanas’ of Shri Guru Charitra eating only fruits. As a result he had a divine vision of Shri Datta Guru. Later, Shri Swamiji instructed him to do 120 ‘Parayanas’ of Shri Dasbodha within 24 months, which he did at Shri Kshetra Ganapati Pule. After doing so, he had a divine dream wherein Shri Swamiji ordered him to accept ‘Sannyas Diksha’. Accordingly, he accepted ‘Sannyas Diksha’ at Shri Kshetra Dhareshwar which is near to Shri Kshetra Gokarna in 1979. Later in a dream Shri Swamiji commanded him to spend the first 2 ‘Chaturmaas’ at Shri Kshetra Sajjangad serving the ‘samadhi’ of Shri Samartha. During his stay at Shri Kshetra Sajjangad, Shri Nityananda Swami had a divine vision of Shri Kalyana Swami, the foremost disciples of Shri Samarth, and received valuable guidance from Him. In 1982, as a token of ‘Guru Dakshina’, he established an ashram named ‘Shri Samarth Shridhar Seva Ashram’ on the sacred banks of Narmada in Gujarat for the benefit of all spiritual aspirants, sages & saints. The next 25 years were spent in roaming across India spreading the word of Shri Dasbodha, ‘Manache Shloka’ and propagating the message of ‘Samarth Sampradaya’. Shri Nityananda Swami left his mortal body at 7pm in the evening of 22nd June 2020 at Nashik.