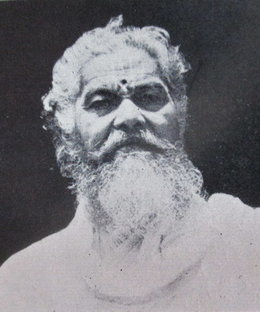 Shri Bhaskar Buva was born in Vadodara. His full name was Shri Bhaskar Junnarkar. His father and paternal uncle were ‘Raj Gurus’ in the Province of Sayaji Rao Gaikwad of Vadodara. His father was a disciple of Shri Sai Baba of Shirdi and his uncle a disciple of Shri Tembe Swami Maharaj. His sacred thread ceremony was conducted on Mount Girnar. He completed his college education and secured a B.Sc degree. During 1940 to 1946 he worked as a soldier in the Indian Army. Later due to his intense ‘vairagya’ or dispassion in material life, he left his army job and travelled to Junagarh in Gujarat where mount Girnar is situated. He reached the base of mount Girnar at night. The forest officials there didn’t allow him to proceed further due to the risk of lions and other wild animals of the Gir forest. Nonetheless, Shri Bhaskar Buva adamantly went ahead and started climbing. He reached the summit temple of Shri Gorakshnath Padukas early in the morning and for the next 6 months he stayed there in a small ashram. Shri Swamiji, along with Shri Aiyya Buva and Shri Datta Buva were returning from their pilgrimage to Badrinath and Kedarnath in the Himalayas. Shri Swamiji received a divine commandment from Shri Samarth to visit mount Girnar. Soon Shri Swamiji reached mount Girnar and was sitting outside the ashram where Shri Bhaskar Buva was attaining a midday ‘arati’. As soon as Shri Bhaskar Buva stepped outside the ashram, he saw Shri Swamiji sitting calmly with perfect equipoise and a smile on His face. Shri Swamiji called him near and said “Come with me to Sajjangad. Shri Samarth is calling you.” Shri Bhaskar Buva was taken aback and was bit sceptical and hesitant. He said “how do I know this is true, how do I know Shri Samarth is really calling me there?” Shri Swamiji asked him to do a 7 day ‘anushthan’. After doing it, Shri Bhaskar Buva had a divine dream where he was told that Shri Swamiji was indeed his Guru and he should obey Him. He immediately prostrated himself on the ground before Shri Swamiji and requested Him to bless him. Later when Shri Swamiji visited south India, Shri Bhaskar Buva accompanied Him for nearly 2 long years. He spent most of his life on Sajjangad. He has also done Narmada Parikrama or circumambulation of river Narmada, a distance of about 2700 kms done walking within 6 months. He left his physical body in 20th March 1981.