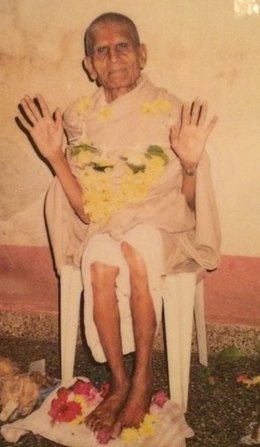 Shri Nilakanth Buva was born at Nashik on 26th Dec 1924. He developed a deep interest in spiritual matters when he was merely 12 years old. He received ‘Anugrah’ from Shri Swamiji at Shri Kshetra Sajjangad. “It was a day of MahaShivaratri, Shri Swamiji was sitting facing north in the ‘shejghar’ (sleeping room) of Shri Samarth. I was sitting facing east. After Shri Swamiji gave me ‘Guru mantra’, I offered flowers at His lotus feet and did His pooja”. This is how Shri Nilakanth Buva has written in detail about that incidence in his memoir named ‘Shridharparv’. During Shri Swamiji’s stay at Shridhar Kuti at Shri Kshetra Sajjangad, Shri Nilakanth Buva was chosen for the ‘nitya seva’ of Him. Shri Nilakanth Buva too stayed at Shridhar Kuti. After Shri Swamiji got up in the morning at 4:30am, he used to massage Shri Swamiji’s back for 5 minutes. Sometimes he massaged Shri Swamiji’s hands and legs using butter. After having bath himself, he then heated water for Shri Swamiji’s bath. Then he used to bathe Shri Swamiji. Later he did all sorts of ‘seva’ like doing pooja of Shri Samarth’s samadhi, pooja of Shri Rama, moping the temple floors, washing pooja clothes and drying them, reading Dasbodh in the evening before all devotees and lastly performing ‘sheja arati’ at night. Many times when Shri Swamiji travelled, He took Shri Nilakanth Buva alone with Him. This offered Shri Nilakanth Buva a rare opportunity to witness many miraculous incidences regarding Shri Swamiji which are otherwise unknown to the world. Even the published biographies of Shri Swamiji lack mention of many such incidences. He has meticulously written about such events in his memoir. During Shri Swamiji’s Mysore visit, Shri Nilakanth Buva insisted Him to give him the experience of ‘Shaktipaata’ or divine transfer of spiritual enery through touch. Shri Swamiji first ignored his requests but later seeing his Guru bhakti and his firm resolve, placed His hand on his head. As soon as Shri Swamiji placed His hand on his head, he instantly experienced as if a lightning stuck him with a deafening sound of thunder. He instantly lost his awarness of all his surroundings. He felt as if he was floating, as if there was no longer the pull of gravity. He was rising higher and higher. So high that even the sky was left behind. He felt he was absolutely one with the cosmos. Thus Shri Nilakanth Buva penned down about this profound spiritual experience in his memoir. For more than 60 years, every year he unfailingly organised ‘Das Navami utsav’ (celebration of the day when Shri Samartha gave up his physical body) at Samangad Killa which is in Gadhinglaj Taluk of Kolhapur District in Maharashtra. It is continued even today. Shri Nilakanth Buva left his physical body on 6th Dec’ 2006.